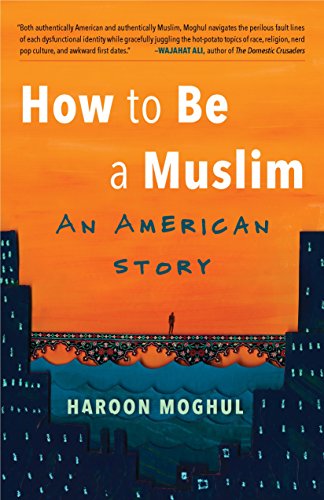 How to Be a Muslim: An American Story

Home » Writing » How to Be a Muslim: An American Story

A searing portrait of Muslim life in the West, this “profound and intimate” memoir captures one man’s struggle to forge an American Muslim identity (Washington Post)

Haroon Moghul was thrust into the spotlight after 9/11, becoming an undergraduate leader at New York University’s Islamic Center forced into appearances everywhere: on TV, before interfaith audiences, in print. Moghul was becoming a prominent voice for American Muslims even as he struggled with his relationship to Islam. In high school he was barely a believer and entirely convinced he was going to hell. He sometimes drank. He didn’t pray regularly. All he wanted was a girlfriend.

But as he discovered, it wasn’t so easy to leave religion behind. To be true to himself, he needed to forge a unique American Muslim identity that reflected his beliefs and personality. How to Be a Muslim reveals a young man coping with the crushing pressure of a world that fears Muslims, struggling with his faith and searching for intellectual forebears, and suffering the onset of bipolar disorder. This is the story of the second-generation immigrant, of what it’s like to lose yourself between cultures and how to pick up the pieces.

Rarely does a book come along that captures the complicated nature of Muslim life in the West with such probing clarity and authenticity. Haroon Moghul’s How to Be a Muslim: An American Story is perfectly titled: part memoir, part history lesson, part philosophy. It is a profound and intimate book—the story of a single American Muslim that also illustrates the fears and strengths of a community.

In sometimes heartbreaking and staggering prose laced with subtle and sardonic humor, Moghul (The Order of Light) shares what it looks like to hammer out an American Muslim identity. As Moghul loses himself and seeks himself, readers will appreciate his story as a second-generation Muslim immigrant, but also as a representative of the modern man: searching, groping, discovering, losing, loving, hoping, dreaming, and suffering. Highly recommended for its candor and relatability, this book will invite readers to fathom what it means to grasp Islam—and religion and spirituality in general.

A searing, intimate portrait of a brilliant but troubled young man struggling with spiritual, psychological and physical challenges while trying to balance a commitment to his religion’s tenets and succeed in a secular society.

It’s the fascinating tension between what others perceive Moghul to be and what Moghul feels that results in a work of biting self-awareness.

This personal account will appeal to fans of memoirs as well as those interested in learning more about the historical, geopolitical, and cultural roots of Islam.